Veggie Castle
Are you the owner?

Veggie Castle II has developed a notable reputation in the vegan community, being the come to the restaurant for superstars when they are in the neighborhood of Queens. Veggie Castle has established relationships with repeat customers such as the renown vegan, Russell Simmons, Tarrus Riley, Walshy, Mr. Vegas, as well as sports players like L.A. Laker Lamar Odom. The restaurant became a destination for vegetarians throughout New York City, as well as celebrities such as Common, Erykah Badu and the band Gym Class Heroes. As a premier vegan restaurant, Veggie Castle has raving reviews on notable vegan directories and blogs such as Happy Cow.

Veggie Castle is the little sister of Sybil’s, a Guyanese restaurant chain. Sybil’s was founded more than 30 years ago by Sybil Bernard, a Guyanese immigrant and single mother of nine. Since her passing in 2001, the restaurants have been run by her son Viburt Bernard, and his children.

With the success of Sybil’s Bakery, Viburt Bernard believed he could make a difference in people’s lives by providing fresh wholesome vegetarian and vegan food. Therefore, Viburt started Veggie Castle II that provides an array of Vegan Caribbean, American, and Asian fusion dishes which is not processed and with very little salt and sugar. Now don’t be discouraged as it’s not just for vegans, it’s for all taste buds who enjoy the fresh and seasonal food. From their vegan mac and cheese, ginger chicken, to their famous veggie burgers, fresh salads, and a variety of dairy and egg free desserts; there’s no need to look any further. It’s hard for many to believe that it’s all vegan. Their juice bar has so many delicious juice and smoothie combinations and remedies that help boost energy and even help to fight cold symptoms. 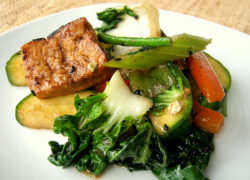