Michael Chambers Photography
Are you the owner?

Born in Kingston, Jamaica, Michael Chambers earned his BA (Honours) in Fine Arts degree at Toronto’s York University in 1983. Chambers has received numerous awards for his outstanding contributions in art and entertainment. His fascinating insight that defies conventional thinking has only propelled Chambers’ involvement into many creative projects.

Chambers addresses controversial topics with his photographic artistry that reflect his diaspora. Some of these topics include social injustice, survival of the human spirit, AIDS awareness and multi-culturalism. For example, using African inspired art as the backdrop, Chambers recently held a photo shoot with an unknown African model with albinism in a quest to influence viewers to consider acceptance of body image and to celebrate beauty in all forms.

Chambers work has been revered internationally and is perhaps one of the most iconic photographic artists on the Canadian landscape. His award-winning films and television credits include being the focus of Anton Wagner’s biographical documentary for CBC, The Photographer, An Artist’s Journey. In addition, Michael’s work was featured in a PBS special Through a Lens Darkly: Black Photographers and the Emergence of a People, a Thomas Allen Harris film. The documentary won a NAACP Image Award for Outstanding Documentary for 2015.

Accolades for Chambers’ photographic genius include a Harry Jerome Award for excellence in the Arts and Entertainment category. Further, as a speaker, he has inspired and motivated aspiring artists and youths at venues including the Art Gallery of Ontario, the Royal Ontario Museum, the National Film Board of Canada and the United Church of Canada.

In 2012, Chambers created an iconic image for TD Bank’s Black History Month poster, a trademark image entitled “Motion” for the International Association of Blacks in Dance and b current’s image for their theatre production of Obeah Opera.

Michael’s career continues to thrive. His images and biography has been featured in coffee table books, including Jamaicans in Canada, Jamaican Art: Then and Now and Revue Noire, to name a few.

Requests for Chambers’ work is ever-increasing among private collectors worldwide as he continues to mentor aspiring creative talent locally and abroad. 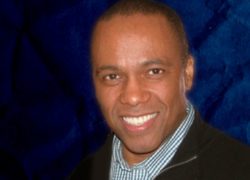