Kaisha Lee
Are you the owner?

Eyes may be the windows to the soul. But anyone who has ever heard Kaisha Lee sing knows that her powerful voice, introspective lyrics and harmonious melodies are the doors to her soul.

Kaisha (also known as Kaysha) was born to create beautiful music. She grew up in Toronto, Canada hearing her dad sing tunes from his native Jamaica. She gravitated to playing the piano when she was barely six years old. Later, during her teen years, she strengthened and nurtured her voice as a member of several gospel choirs and chorales.

Carving out a musical career as a multitalented artist is one way to ensure longevity in a rapidly changing industry. And Kaisha Lee is here to stay. As a young woman, she took her love of gospel music and Negro spirituals on the road with the Nathaniel Dett Chorale. That tour covered numerous stops in Canada, the U.S.A. and France. Between performance commitments, Kaisha shared her considerable talents working as a vocal coach and piano theory teacher.

Versatility is key to the success of any young artist. Kaisha is not only an accomplished singer and piano player, but she writes her own songs. Her songwriting garnered her a Gemini award as part of the Sharon Riley and Faith Chorale. Kaisha’s music runs the gamut from soul to reggae, from jazz to dancehall. Incorporating a fusion of slow- to up-tempo reggae and soul-influenced R&B, her songs lift you up through life’s downs with messages of love, hope and inspiration.

With this varied repertoire of experiences, she was ready to launch her solo career in 2009. She released her first demo recording, Undefined, in 2010, and became a fast favourite on local Caribbean radio stations. The popularity of “Heart of a NinJah” was just the opening she needed to focus on setting more singles free — a smart move that produced two more hits, “Clean Heart Order” and “Rise Above It”.

Her first feature album I Heart Reggae was unveiled in 2014 with two memorable events, I Heart Reggae Montreal and I Heart Reggae Toronto, which showcased local reggae artists and venues in each city. Kaisha followed up in 2015 with an appearance on Global News, and a party for the newly released single, “Speak To You” at downtown Montreal’s chic Time Supper Club.

There’s nothing quite like a live performance to bond an audience with an artist. Kaisha and her captivating voice have won over hearts in a long list of shows that include Afrofest, Trane Studio Jazz Lounge and Follow Your Instinct (a talent showcase) in Toronto. In her current home base of Montreal, she has poured her heart and soul into shows at Le Piano Rouge Lounge (where she was an in-house performer in 2012 and 2013), Club Soda, Belmont, Devi and Club Balattou among others.

Kaisha’s international appeal has taken her from open-mic night at Village Underground in NYC, to collaborating with British artists in London, and recording for her upcoming album with reggae musicians at Tuff Gong Studios in Jamaica. On the ground in Montreal, she sings and plays piano regularly at the House of Jazz in Laval. She also shares her gifts as a music educator and holistic vocal health coach.

With 20 years of experience teaching music, Kaisha is the owner and operator of The Instrumental Voice School of Music and Holistic Center. Her teaching goes far beyond book theory to finding meaning in her deep personal experiences. 10 years of physical struggle that threatened to derail her career have led her down the path to becoming the holistic vocal coach she is today. She also credits, among others, her voice teachers, Ali Garrison and master teacher Angela Hawleshka, with playing integral roles in her recovery and empowerment.

Using holistic practices, Kaisha successfully overcame the debilitating illness and back injury that nearly ended her career. Finding that freedom in her body also helped her find freedom in her natural voice. Her weekly performances with the corporate band “1945” now include dancing, as well as singing.

Recently, her loyal fans have seen Kaisha branch out from her musical grounding into creating the I Heart Reggae clothing line. The items, made of all-natural fibres such as hemp and bamboo, are available to the general public at iheartreggae.ca.

Her music can be found on iTunes and Amazon, and through other digital outlets like Spotify. Fans can also find her on SoundCloud.com/kaishalee, or other social media by searching “kaishalee”.

Won a Gemini award for songwriting as part of the Sharon Riley and Faith Chorale (2006)
Performed at the inauguration of former US President Barack Obama (2009)
Launched full album, I Heart Reggae (2014)
Stole the show at Jamaica Association of Montreal’s Queens of Reggae (2016)
Opening act for I-Octane at Club Soda in Montreal (2016)
Shared the stage with the highly acclaimed Beres Hammond at Montreal International Reggaefest (2016)
Solo show in Quebec City (2016)
Performance and interview with Global News (2015)
Opening act for reggae star Etana (2015)
Opened for veteran reggae artist Luciano (2013)
Performed at the annual Rastafarian open-air celebration of Haile Selassi I (2011 Jamaica) 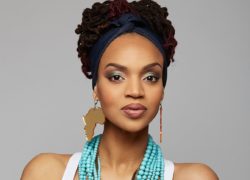