Jay Martin – Comedian
Are you the owner?

Toronto is home to world-class talent, and Jay Martin’s multi-faceted finesse is no exception. Some call him The Renaissance Man for his many talents in comedy, event production, community work, and more. Some call him Canada’s own Steve Harvey, because of his reputation for having audiences rolling in the aisles with a clean comedy act. There is no other comic in Canada capable of doing the same.

Canadian comedy giant Russell Peters caught wind of Martin’s first public comedic performance, and was immediately impressed. Peters decided to take him under his wing and invited him to open for him across the country. Since then, Martin has toured with not only Peters, but also with stars such as Jamie Foxx, Brian McKnight and Kirk Franklin. Martin is also a skilled event producer, bringing quality comedy events to audiences in Canada, America, and the Caribbean.

Audiences know that Jay Martin’s shows and events are not to be missed, because they want what only he can provide – a rich and high-quality entertainment experience. He is a refreshing storyteller and an acute life observer who has an uncanny ability to make the mundane routine of our everyday lives something to laugh at. Drawing from his own personal life experiences, whether it be from his stubborn Jamaican dad or one of his four children, Martin takes you on a comedic journey like none other. 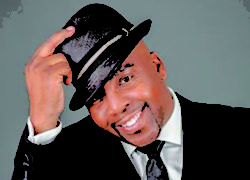