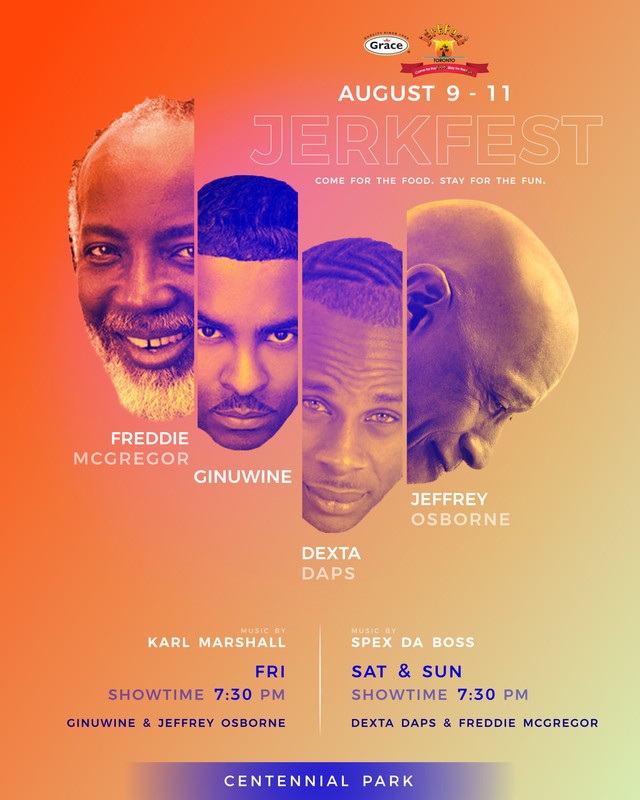 JerkFest is an annual festival which takes place around the second weekend in August every year. JerkFest celebrates the world renown jerk cuisine. Its a fusion of jerk food, pulsating music, family friendly entertainment and good vibes – all under the throbbing Toronto sun.

JerkFest began in 2002 by Island Promotions Inc. and was taken over in 2008 by Caribbean Promotions Arts & Culture Inc. – A not-for-profit organization as a need for more events to fill the void after the hype of Caribana. So to extend the Caribbean festive summer season, the second Saturday of August was chosen and JerkFest was added as a major not-to-be-missed calendar event which draws thousands of visitors to Chinguacousy Park, Brampton, Canada each year.
Over the years, JerkFest has been different things to different people: To the food lovers, its all about the tantalizing tastes, mysterious flavours and captivating aroma of the jerk food – chicken, pork, beef, lamb, seafood, vegetables. And no matter how full they are from sampling all the jerk dishes, these serious gourmands will not pass up on the added offerings of say curried goat, mannish water or conch soup.

To those with young kids, JerkFest is the ideal place to release them into the engaging kids zone while you relax nearby. Ah, what better way to be “free” of the kids while enjoying spicy jerk food and listening to the likes of Bob Marley.

To the business community, JerkFest is an effective medium to showcase products and services. Its the ideal time and place for the savvy marketer to connect with a captive multi-cultural audience.

To the community at large, JerkFest, through its mandate to foster community togetherness, is a stage to showcase its young and upcoming talent and a contributor to local charities annually.

JerkFest is one of Toronto’s premier calendar festival, which is annually in the Celebrate Ontario festival & event listing publication.

All Events Add an Event