Dr. Thomas Parham
Are you the owner?

Thomas A. Parham, Ph.D. is a family man who resides in the Southern California area with his wife Davida. Dr. Parham is Vice Chancellor, Student Affairs and an adjunct faculty member at the University of California, Irvine.

Prior to these positions, he served as Assistant Vice Chancellor for Counseling and Health Services, Counseling Center Director, and Director of the Career and Life Planning Center at UCI. Before returning to UCI in 1985, Dr. Parham held an appointment on the faculty at the University of Pennsylvania in Philadelphia.

Since his return to Orange County, Dr. Parham has been an active member of this community contributing his talents in the areas of social advocacy, community uplift and youth empowerment.

In 1986, he was appointed to the City of Irvine’s Human Relations Committee. After being elected chair of that committee, he helped draft the city’s first human rights ordinance, which was passed by the city council. He also served as chair of UCI’s Martin Luther King Jr. Symposium for 10 years, and sought to extend the boundaries of the university community countywide.

In the early ’90s, he helped charter the Orange County chapter of the 100 Black Men of America, 100 BMOC. While serving as their first chair of the education committee, he helped to develop the 100 BMOC’s signature Passport to the Future program, and is the architect of their Rites of Passage component.

He extended his reach and influence to the greater Los Angeles area by collaborating with the College Bound program to produce a similar Rites of Academic Passage component for high school students. After much encouragement, he has taken the Rites of Academic Passage model and turned it into an intellectual property now available for commercial sale. That program is known as The Bakari Project. He remains intimately involved with both programs to this day.

Elected to serve as the 5th president of the 100 Black Men of Orange County organization in January, 2002, a term of service he completed in 2005, his efforts include collaborating with Turning Point Communications and the City of Irvine to host the Annual African American Business Summit; planning for a Fall Health and Wellness Summit; initiating an Institutional Report Card initiative to evaluate the quality of the educational experience for African American youth in Orange County schools; serving on Orange County Sheriff’s Community Coalition Program; and helping to recognize and honor citizens of all colors who make a difference in the African American community by co-chairing the 100’s award committee for its annual gala. He has also served as national chair of education for the 100 Black Men of America.

For the past 35-plus years, Dr. Parham has focused his research efforts in the area of psychological nigrescence and has authored numerous articles in the area. Writing in the areas of identity development, African psychology and multicultural counseling remain his primary focus. He is a co-author of The Psychology of Blacks: An African American Perspective, 2nd ed. (Prentice Hall, 1990) and the author of Psychological Storms: The African American Struggle for Identity (African American Images, 1993) and Counseling Persons of African Descent: Raising the Bar of Practitioner Competence published by Sage in 2002. He has also co-authored the updated 3rd edition of The Psychology of Blacks: An African Centered Perspective, currently available through Prentice Hall (2000). He has recently completed work on the much anticipated fourth edition.

In addition to authoring over 45 journal articles and/or book chapters, he has also produced several videos including Counseling African Americans, Youth and Violence, and Innovative Approaches to Counseling African Descent People available through Microtraining & Associates, and Working with African American Clients, available through the American Psychological Association.

Dr. Parham has been interviewed and quoted extensively in regional and national newspapers and magazines. He participated in the 2005 State of the Black Union hosted by Tavis Smiley which aired on CSPAN, and appeared in the recent film, Fair Game, directed and produced by Mario Van Peebles.

In characterizing him, some have written: “Parham is a gifted and charismatic speaker in the tradition of Martin Luther King and Malcolm X. Indeed, for many, his presence as a public figure is transformative; the power of his innate humanity and manifest love conveying an overwhelming sense of acceptance and understanding. You feel a great many things in the presence of Dr. Parham; mostly, you just feel better.” (Mears, 2002).

While serving as Vice Chancellor, Student Affairs at UCI, Dr. Parham prides himself in heading a Student Affairs team dedicated to supporting the academic mission of the university, enhancing the co-curricular aspects of student learning, assessing learning outcomes, and promoting opportunities for leadership development and character building among students.

1982 Receipt of the Outstanding Staff Person Community Service Award from the University of California, Irvine
1984 Selection as an Outstanding Young Man in America

1987 Management and Professional Service Award from the University of California, Irvine

1988 Research/Scholarship Award from the National Association of Black Psychologists

1995 Samuel H. Johnson Award for Exemplary Service and Scholarship from the

Association for Multicultural Counseling and Development

Exemplary Community Service Award from the Orange County, CA Chapter of the N.A.A.C.P.

2003 University of California, Irvine’s Lauds and Laurels Award (one of UCI’s most distinguished honors) for staff achievement

2009 Honorary Doctorate of Humane Letters from the Phillips Graduate Institute 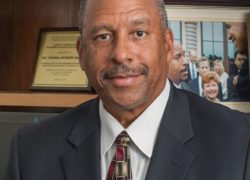