Dr. Patricia Griffen
Are you the owner?

MY STORY
I made the decision to become a Clinical Psychologist in the 9th grade while enrolled in a course, entitled, “Personal Problems.” This would be equivalent to a contemporary high school psychology course. In the small town of Malvern, there were no psychologists and at that time we did not even have a mental health center. It was not until my freshman year that I met my first psychologists, my professors at Ouachita Baptist University. It is uncommon for a 14 year old to make a career decision that remains unwavering throughout the course of her education; however, such was my journey. I was in graduate school before meeting my first African American psychologist, Dr. Robert L. Williams, a native of Little Rock, Arkansas. At that time, Dr. Williams was a psychology professor at Washington University in St. Louis, Missouri. I was unwavering in my decision and knew that I would have to prepare myself academically to compete for graduate school, because I had decided to obtain a PhD in Clinical Psychology.

My family has always encouraged the pursuit of higher education. I am a third generation college graduate. My maternal grandfather and his two siblings graduated from Arkansas Baptist College. During that time, this was their only option for college. My mother completed an associate’s degree from Arkansas Baptist College and later completed her bachelor’s degree from Arkansas Mechanical and Normal College in Pine Bluff, now UAPB. Several other family members graduated from college. The importance of competing academically was part of my DNA.

I graduated magna cum laude from Ouachita Baptist University and ranked 5th in a class of 205. My professors were so supportive of my plans to pursue graduate studies in Clinical Psychology and wrote glowing letters of recommendation. With my academic record, letters of recommendation and other relevant support, there was never a doubt that I would be accepted into graduate school and would have to make a decision. At graduation I had not been accepted and had a collection of rejection letters. Little did I realize that this was a time when graduate schools were not affirming of diversity and closed doors of opportunity for students of color to pursue a PhD in Clinical Psychology.

I shall never forget how encouraging Dr. Weldon Vogt, my major advisor, was and how he actively researched other possibilities. He made a personal visit to my home in Malvern with names of other schools to consider. He was accompanied by his lovely wife who was our Baptist Young Women’s advisor. Dr. Vogt was relentless in this pursuit on my behalf and encouraged me to apply to the University of Arkansas. Of course, my plans were to get out of Arkansas, especially since my parents insisted that I remain in the state for undergraduate studies. Reluctantly I applied and was accepted.

After arriving on campus I learned about the work of the Association of Black Psychologists, an organization that broke away from the American Psychological Association due to discriminatory and oppressive practices toward psychologists and students of color. One of their initiatives was to challenge universities to diversify their enrollment and open the door for students of color to pursue graduate studies in psychology. The drafter of this Ten Point Program was Dr. Robert L. Williams originally of Little Rock. I am quite sure that Dr. Vogt never met Dr. Williams. However, I am deeply and eternally grateful for the combined efforts of a white psychology professor at Ouachita Baptist University and a black psychology professor at Washington University who collectively worked to open the door for me to pursue a fulfilling career in psychology. Both were working against institutional racism from different perspectives with a mutual goal in mind. How different my life would have been without the combined social justice advocacy of these two great psychologists. It is only through a multiracial, collaborative effort that racism and systemic oppression can be eradicated.

She graduated with honors in 1978. Having more than 40 years of diverse experiences, especially in CLINICAL PSYCHOLOGIST, Patricia L Griffen affiliates with no hospital, and cooperates with other doctors and specialists without joining any medical groups. Call Patricia L Griffen on phone number (501) 223-8883 for more information and advice or to book an appointment. 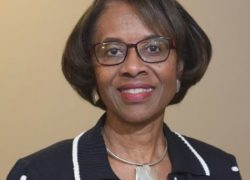