Dr. Brandon Gamble
Are you the owner?

Dr. Gamble’s Bio
Dr. Brandon Gamble received his training in psychology from Oakwood College for his Bachelor’s degree. San Diego State for his Master’s degree, and the University of Southern California is where he earned his Doctoral degree in Educational Psychology.

From 1998 to 2009, he served middle and high school students as a school psychologist in the Long Beach Unified School District before becoming an associate professor at Cal State University Long Beach, in the College of Education for the Educational Psychology program from 2007 to 2018. He has had the honor to serve as the adviser for the Black Student Union at CSULB. Currently, he has returned to his alma mater to serve as the Dean of Student Success at Oakwood University in Huntsville, AL.

Dr. Gamble’s written work and research has focused on African American male’s social capital and familial support networks that empower young men to succeed in academics. For his dissertation titled, Social capital networks of institutional agents and the empowerment of African American youth, he interviewed Guide Right program leaders for Kappa League and the African Male Achievers’ Network, which are a part of the youth programs of Kappa Alpha Psi, Fraternity, Inc. He has presented at national and international conferences regarding disproportional placements of minorities in special education, access to quality mental health care in schools, African American student achievement, and Mediated Learning Experiences.

From 2012 to 2013 he served as President of the California Association of School Psychologists. He also served as the Western Regional representative of the Association of Black Psychologists (ABPsi) from 2016-2017. From 2013 to 2018, he was the liaison of the ABPsi the to CASP. He has served his chapter as the Guide Right Director from 2001-2003 and again from 2017 to 2018. He has also served on the national Guide Right sub-committee for mental health.

Dr. Gamble enjoys spending time with his family, martial arts, playing guitar, and surfing, which are all the things he dreamed of doing as a young man growing up in Southern California. He hopes to help you reach your dreams and beyond. 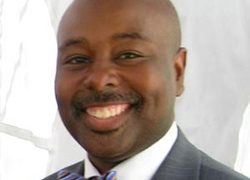