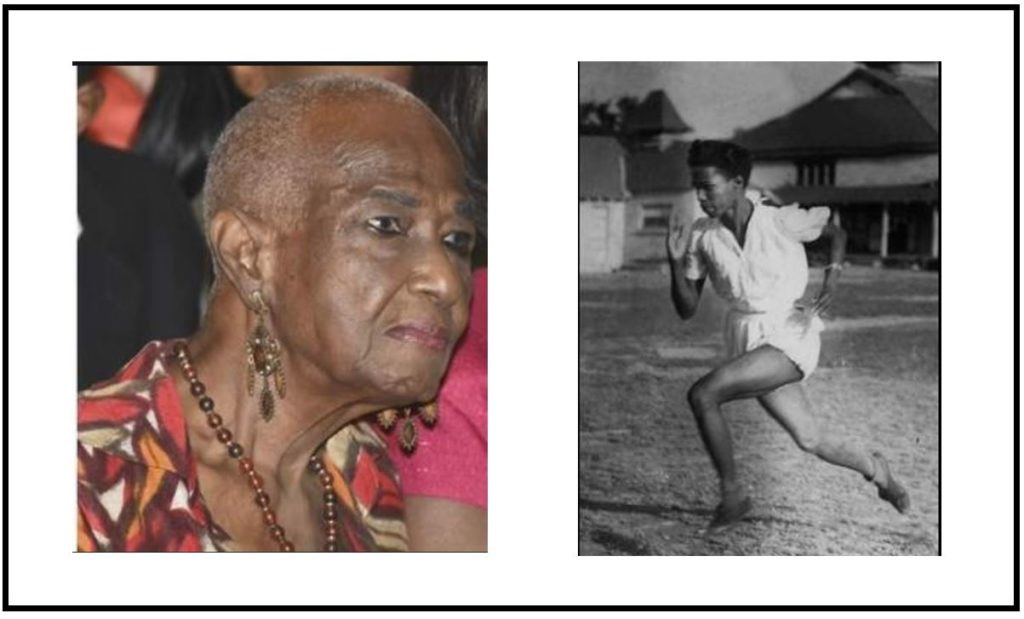 Seventy-one years ago, at 25, she took her place amongst the six best female sprinters on Earth in the 100-metres final at the 1948 Olympics. Despite suffering sea sickness on the banana boat trip from Jamaica to London, she set the pace for a long line of great Jamaican speedsters with her accomplishment.

Born in Kingston on November 29, 1922, her journey to the Olympics started her sporting career at St Hugh’s High School.

“We had tennis, netball and gym exercises and school sports, which were just house sports,” she said in 2008. “There were no Girls Champs in those days, and we didn’t have any technical training. We didn’t wear spikes. We wore our little rubber shoes, and we didn’t get down on our marks. We just stood up like an 800m and run off, you know. It was just raw talent. Those who had talent and could run, ran because there was no real coaching as such.”

Little Cynthia helped York House to be the dominant power at St Hugh’s Sports. “I came first in all the events that I entered in, and I ended up being champion, but there were no times so I had no idea that I was up or down nor on par with the people that were running,” she reminisced.

She went to work at PA Benjamin when she left high school but in 1946, her fellow St Hugh’s graduate, Vinton Beckett, the high jumper, who would later be an Olympic teammate, told her that training sessions for Jamaica’s team to the Central American and Caribbean (CAC) Games were being conducted at Caxton Park, Vineyard Town.

There she received proper coaching for the first time.

“I got my first introduction to getting on the marks, and in those days, you dug holes” she recalled, “How to dig your hole and so, getting on your marks, how to move your arms, how to bring up your legs and so and so, knee lift, arm swing. They used to say go before the mirror and practice so your arm swing is even and so on.”

With their expert advice, Cynthia won both trial races to make the team. She was on her way to Barranquilla, Colombia, for the CAC Games.

“Then Barranquilla came and I won the gold medal in the 100m. I was second in the 50 because I never was a good starter, said the retired doctor. Sprint relay duty earned her another silver medal.

The late Gertrude Messam, a member of Jamaica’s team to the 1938 CAC Games, encouraged her to train for the 1948 Olympics and she was among the ladies on Jamaica’s first ever Olympic team. The others were Mavis Evelyn, Kathleen Russell, Carmen Phipps, and Beckett.

“The meet was in yards and I went 10.8”, she recalled. “I don’t usually remember my times, but I remember that one because they said it was equalling the world record at that time.”

Unfortunately, she fell ill after her first meal on the banana boat that took the Olympic team to London.

She lost substance from her already compact 100 pound frame, and though she tried to keep her spirits up, she arrived in London well off peak condition.

“I tried to get up and jog around the deck and keep my legs from flubbing down and so. But naturally, I was not at the point where you could say at the peak of fitness to compete in an Olympic Games, but I went and did my best. In the final, I could feel that I was weak, I tried, but I couldn’t, didn’t have the stamina to go forward.”

In London, her times showed how she had suffered on the boat trip. She had successive clockings of 12.4 in the heats, 12.5 in the semis, and 12.6 in the final, which was won by Dutch superwoman Fannie Blankers-Koen, with Cynthia placing sixth.

She also reached the 200m semi-finals, and since the event was being contested for the first time, her heat clocking of 25.6 seconds was for, a short time, an Olympic record.

Thompson won three silvers in the 1950 CAC Games – in the 50 metres, the 100 metres and the relay and was still running in the Olympic year 1952. However, she was not selected as Jamaica sent only two female athletes.

By then, she was in the United States. After a short stint at Roosevelt College in Chicago, she received a scholarship to Tennessee State University.

During her career, she established personal best of 12.0 for the 100 metres and 25.1 for the 200. Ironically, there were 31 women in the recent Beijing Olympics, who ran slower than 12 flat in the 100 metres competition.

Dr Thompson maintained a healthy interest in athletics for many years and attended meets even into her nineties.

On one busy day in 2014, the Olympian was guest starter at the St Hugh’s 5K road race and was among Olympians honoured at the JAMALCO Development Meet in Halse Hall.

She passed away at The University Hospital of the West Indies. Source – Jamaica Observer