Jamaican Doctor from Westmoreland, discovery saved the lives of millions of children! 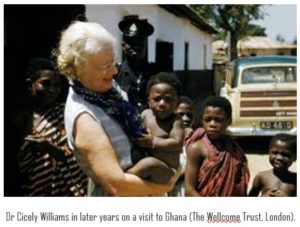 Dr. Cicely Delphine Williams, born 2 December 1893 at Kew Park, Bethel Town, Westmoreland, grew up to become a pioneer in her chosen field of paediatrics and is also one of the first female to graduate from Oxford University and the first female doctor in Jamaica. Dr. Williams was credited for diagnosing, identifying the cause, and finding a prevention and a cure for a disease. The disease she identified was kwashiorkor, a severe form of protein-energy malnutrition, fatal if not treated promptly.  Dr. Williams was the first person to recognize and conduct research on kwashiorkor and differentiate it from other dietary deficiencies.

Dr. Williams was directly  responsible for initiating a worldwide campaign against the use of unsuitable sweetened condensed milk as a substitute for breast milk and for the diagnosis of the dreaded childhood nutritional disease, kwashiorkor. She also developed her concepts of an integrated preventive and curative health service for mothers and children. One of her great achievements was an experimental primary health scheme in Trengganu, in north-east Malaya, where a network of village health centres was set up with nurses trained to recognise the social aspects of disease, and indigenous midwives retrained in safer methods.

In 1936, she was transferred to Malaya as a Pediatrician to the College of Medicine in Singapore. Whilst in the state of Trengganu as State Medical Officer when the Japanese invaded in 1942, she became a prisoner of war and was placed in the notorious Changi Prison Camp. While imprisoned, she became the head of the women and children camp and was punished for taking a stand in their interest.  In 1945 the day of the allied victory over Nazi Germany found Cicely in the hospital near dead, she was nursed back to heath by some old Malayan friends. In 1948, Cicely became the first head of the World Health Organisation’s Maternal and Child Health organization in Geneva. In 1949, she was also the first appointed for the same Health Organisation’s Maternal and Child Health organization in South East Asia region.

After her release she returned to Jamaica and researched a cure for “vomiting sickness” caused by ackee poisoning. For her service to medicine she became the first recipient of the Jamaican Government’s Order of Merit and the Companion of the Order of St. Michael and St. George.

At an age when most people would think about retirement, Cicely Williams continued with boundless energy in a career of research and teaching, in London, at the American University of Beirut, with the Family Planning Association, and Tulane University. She conducted surveys on child health in Borneo, Italy, Yugoslavia, Tanzania, Cyprus and Uganda. She worked with Palestinian mothers and children in the Gaza Strip. She lectured and advised on MCH in over 70 countries. In 1978, she retired ‘except on demand’ – and of course, she was very much in demand. From the 1950s on she was awarded many fellowships and tributes; at her 90th-birthday symposium at Somerville College, guest speakers – friends and admirers – assembled like an international Who’s Who of MCH and nutrition.

The significant and historic impact of  the Hon Dr Cicely Delphine Williams OM, CMG, DM, MD, DSc, FRCP, on the world  of medicine, shows that it does not matter where you are from.


Warning: Use of undefined constant blog_recent_args - assumed 'blog_recent_args' (this will throw an Error in a future version of PHP) in /home/customer/www/yaadlinks.com/public_html/wp-content/themes/yaad-links/single.php on line 60

Congratulations!!! Jamaican born scientist Dr. Patrice Smith, is now the Dean of Graduate and Postdoctoral Affairs of a top university in the world. She discovered a way to repair damaged nerves.

Meet Donna McLeod, the first Jamaican-born person to serve in the Gerorgia Legislature.

Illiterate 7 year old girl from St.James, turned her life around and got into college at age 12 and then blazed an extraordinary trail

Jamaican Doctor from Westmoreland, discovery saved the lives of millions of children!

Jamaican Angella Reid, from Trinityville, St Thomas, to a top position in the US White House.

Raymond Chang, from selling fruit cakes in Jamaica to owning a $300m business in Canada

The first black woman employed by the BBC, is a Jamaican from Santa Cruz, St. Elizabeth

From Rags to Riches – Learn how a Jamaican turn the sale of a car battery into a $17m business.