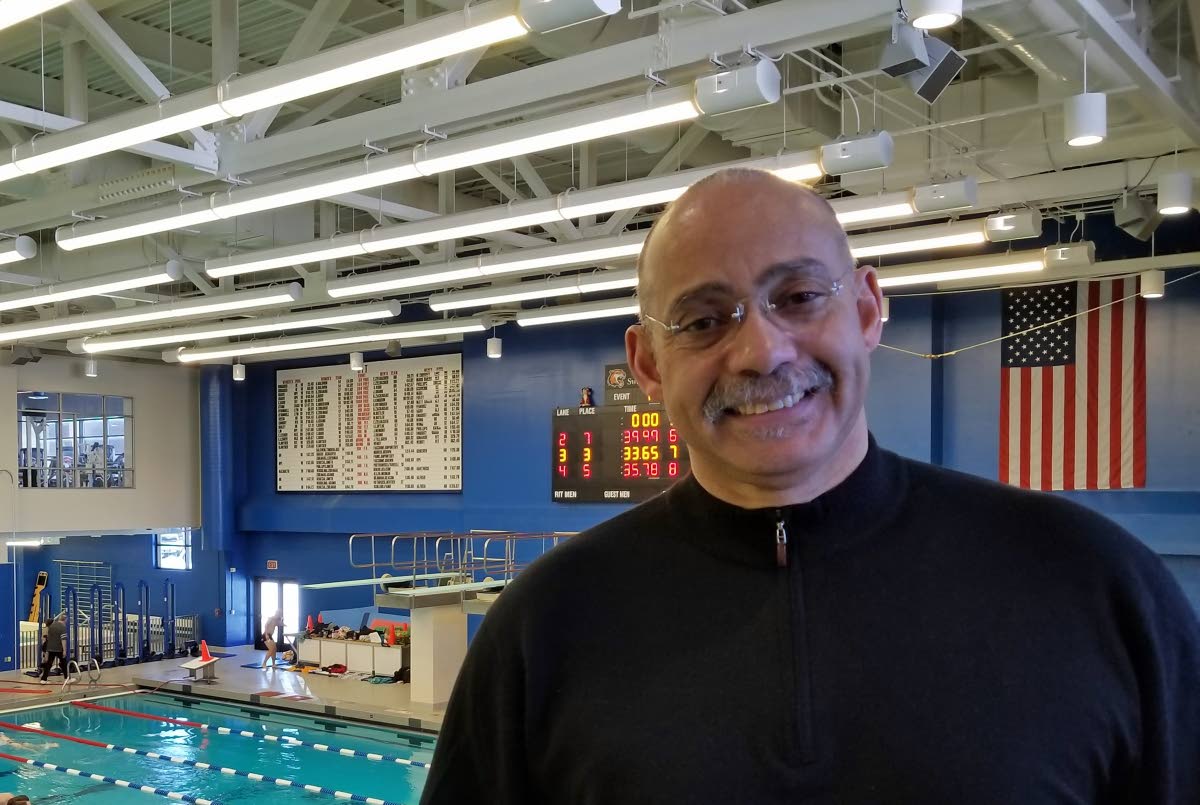 Electrical engineer Dr Andre Cropper is also a swimmer. He got a scholarship in the 1970s through swimming which enabled to attend Howard University.

“When next you watch a flat screen TV or the slim screen on your laptop, thank Trinidadian research engineer Dr. Andre Dominic Cropper.

He is the mastermind behind the Flat Panel Display Touch Screen made from thin layers of laboratory produced diamond called Organic Light Emitting Diode (OLED).

Cropper’s US patent for a new Organic Light Emitting Diode (OLED) facilitated the development of flat panel displays, which are today used in most electronic devices from ATM machines and flat-screen TVs to laptop computers. ” The True Caribbean.

Newsday…MANY people enjoy Organic Light-Emitting Diode (OLED) displays today, whether it is on a television or cellphone. An OLED display, according to www.pcmag.com, is a “display technology that offers bright, colourful images with a wide viewing angle, low power, high contrast ratio and fast response time for sports and action movies.”

Dr Andre Cropper, an inventor and electrical engineer, is that Trini. A 2015 Biomedical Science Careers Program article describes Cropper as a “celebrated engineer whose accomplishments include the development of thin layers of laboratory-produced diamond that could be used in the semi-conductor industry.”

For his work, he, once again, this year, received an Inventor Award. He got that award three times before in 2014, 2015 and 2016. Of his numerous awards, Cropper received two awards from National Institute of Higher Education, Research, Science and Technology (NIHERST). He received the Caribbean Icons in Science Technology and Innovation award for outstanding innovations in electrical engineering in 2006 and the National Icons in Science and Technology Award for outstanding innovations in computer and electrical engineering 2005. 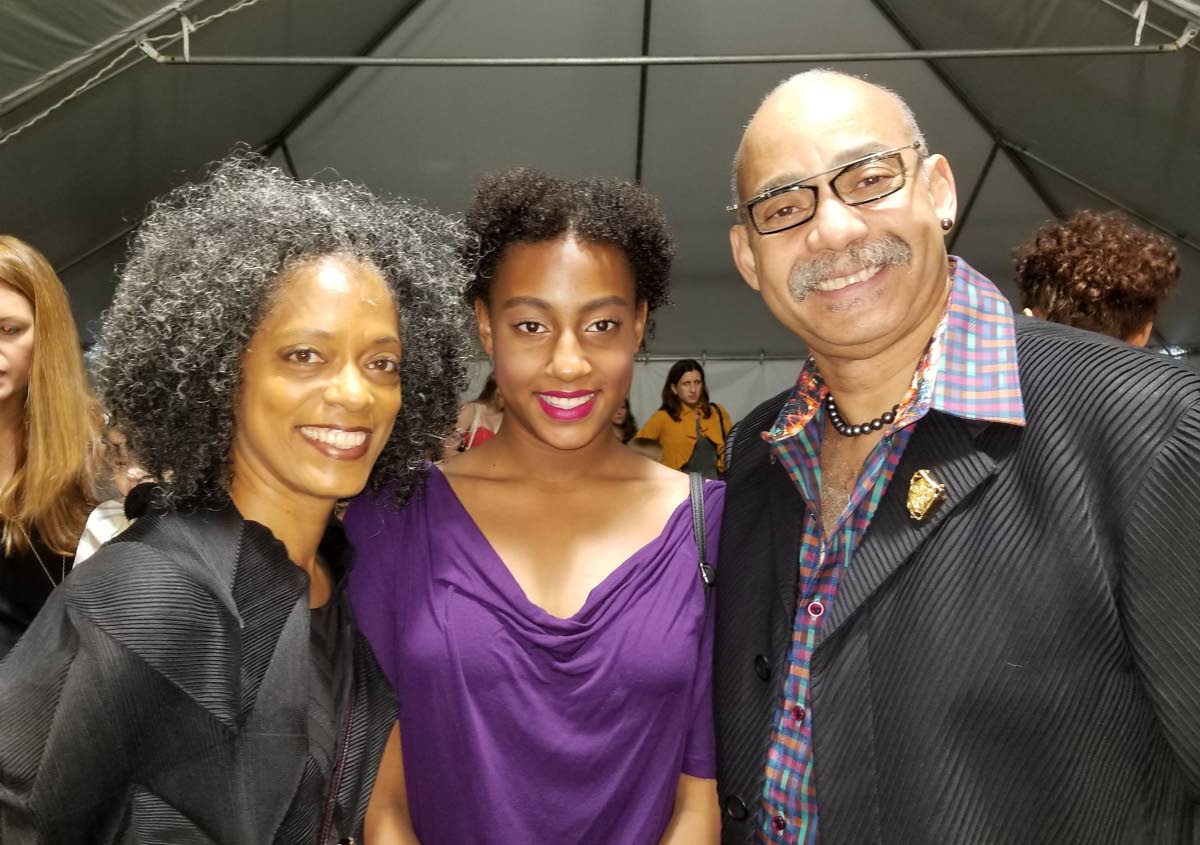 While growing up in St Lucien Road, Diego Martin, Cropper would admire the work his father, Anthony Cropper, did around the house. Anthony was an electrician.

“He did all of his stuff, himself and I was fascinated how he would wire up a house and build things. He was very much into electronics. As a young boy of about six or so, I wanted to imitate my dad.

At Fatima College, he was “heavy into” math and physics. Cropper, 57, is also an athlete, a swimmer and represented TT at Caribbean and international games during the 1970s. He got a scholarship around 1978/79 and attended Howard University. It was there he realised that what he wanted to do was electrical engineering. “When I went off to Howard University I was actually the first TT swimmer to get a scholarship abroad at the university. When I sat in the auditorium on the first day, they said, ‘Engineering is one of those curricula Howard is extremely proud about.’

“When it was time to enrol, I said I wanted to follow this path that got me so excited and that I was inspired by my father about. I signed up for electrical engineering in honour of him. I just loved it. I excelled at it and the rest is history.”

Cropper worked at places such as imaging technology company Eastman Kodak until it filed for bankruptcy.

“That business (was sold) over to ITT (a manufacturing company specializing in aerospace, transportation, energy and industrial markets). I left Kodak– because I was sold as part of the business– to ITT and that is a defence company.” Since then he has worked in defence.

Working with OLED displays was one of Cropper’s first big “breakthroughs.” On patents.justica.com, one of Cropper’s patents is described as “touch screen display and method of manufacture.”

“They were trying to look at ways this new OLED technology (could be used)…and they were looking for somebody to commecrialise it and make it into products. So I came over as the project manager for the ‘productisation’ of the OLED films at the time.”

That time was really exciting for him, he said. “Everybody taps a phone which is a touch-screen OLED panel, well one of the particular patents I have, particularly describes how to make that happen. “But we worked with OLEDs before people saw them in phones and cameras. This is way back in the 2000s. We were doing OLED displays. We were putting them in cameras, putting them in picture frames. I went out to California and demonstrated all of these prototypes and it was exciting. No one had seen such things, everybody was fascinated with it. Now OLED is everywhere…”

“Just after OLEDs I moved into the world of hyperspectral imagining. That is a classified world I work in but I can’t really talk about.”

This world of hyperspectral imaging was not Cropper’s area of specialisation but having his PhD enabled him to learn the field. He is now a subject matter expert in the field and an engineering fellow in the area which is the highest rank in the engineering field.

This is why he always encourages youth to pursue a PhD. “You can learn anything with an advanced degree,” he added.

This field is different because “I am applying myself to solve, what I would call, extremely urgent problems that exist in the world today. While I was in Kodak I was doing commercial things to help make things easier for people, make things fancy, new cellphones, new cameras.” 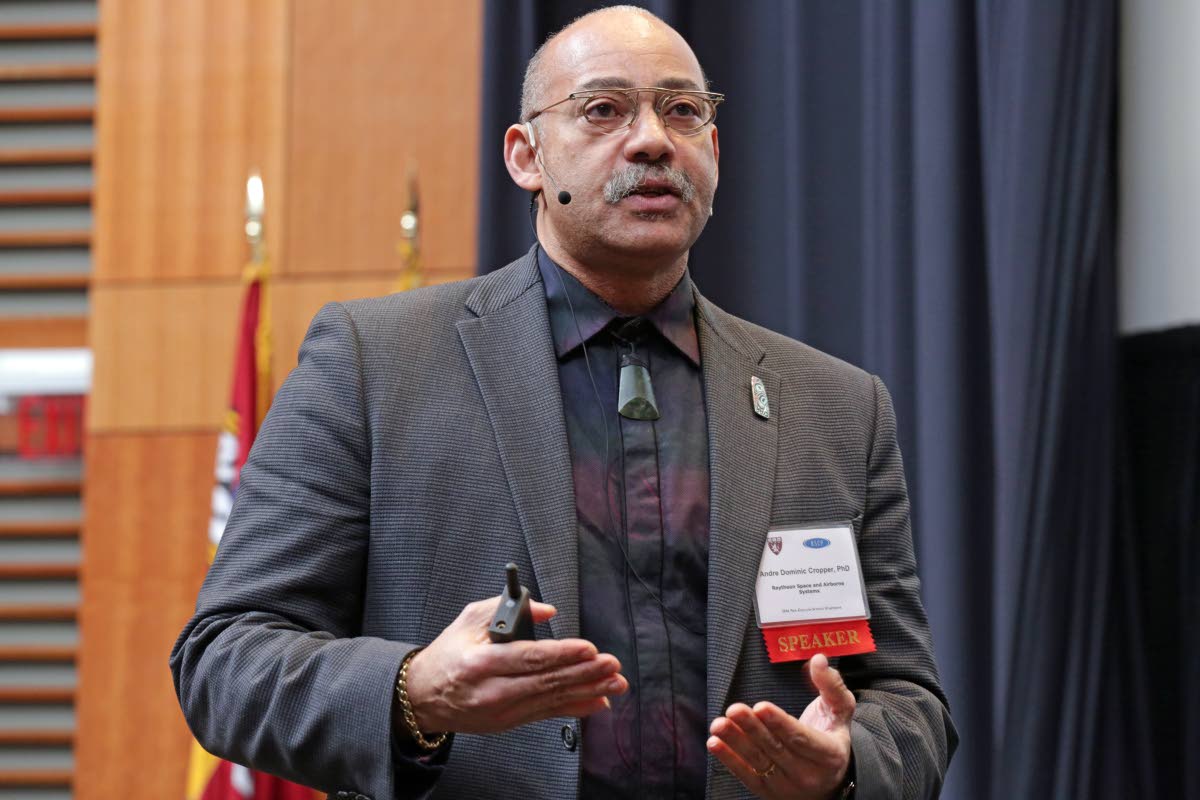 Cropper believes that there needs to be a paradigm shift in TT, where science, technology, engineering and mathematics (STEM) is given the same importance as sport especially with global challenges like climate change.

TT and the Caribbean, Cropper added, need to show that they really value STEM education and not just say it. “It is all good with sports and stuff. We need to give STEM education and its professionals the same sort of value, publicity and credit as we do sports.”

He also sees innovation as integral to TT’s future. “I know we have the patent process. When I was down there a couple years ago, talking to one of the engineering boards and I heard it was so hard to file a patent. We need to make those things easier in TT. We really need to have an innovator’s society, where I don’t know if the Government starts it up or the private sector….It needs to be promoted to the children, the youth, society. We need to embrace innovation…”

He suggested TT innovate in areas such as alternative energy and mass transit.

As the world stands on the edge of change again, with the advent of robotics and automation, Cropper sees a new intellectual revolution coming. “Automation and robotics is something that has been coming for a long time…I think what is coming is another intellectual revolution. That is the one I am concerned about. Now computers will be making decisions for us. That is the area I am a little worried about because when the industrial revolution came…a lot of work changed for the average person.”

Although he has not decided if this is good or bad as yet and still needs some more information on it, he thinks a discussion about things like these needs to happen at all societal levels.

But he was certain that “we in the Caribbean are still trying to adapt to the industrial revolution. We are still struggling with unemployment. We have to find ways to lift the whole status of education for the whole Caribbean region and we are little behind the curve there.

“So, when this new revolution comes we have got to start thinking about it because we may become obsolete if we don’t,” Cropper said.