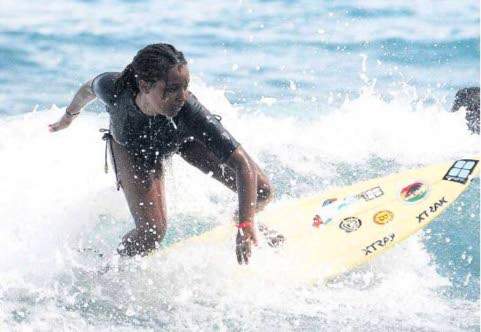 Surf Girls Jamaica, a film about Jamaican Imani Wilmot and her team on female surfers, premièred yesterday on the Real Stories YouTube channel — the documentary arm of the popular online platform.

The project by documentary filmmakers Joya Berrow and Lucy Jane for Little Dot Studios examines Wilmot’s passion for the sport as a means of transforming the lives of the women around her. Aimed at increasing the Jamaican female surfing population and promoting the sport of surfing.

“I’ve been doing my all-girl Learn-to-Surf camp since 2010. I really just wanted to increase the population of female surfers in Jamaica because whenever we had surfing competitions it was the same female faces that would turn up. It was a project that I was doing on my own and with the support of family and friends,” Wilmott told the Jamaica Observer.

However that all changed in May of last year when she was approached by Berrow and Jane who were so taken by her story that they wanted to tell it to a much wider audience via the medium of a documentary.

At first Wilmot was apprehensive. She noted that this is her life and work and was wary of how others would tell her story.

“I’m not doing this for the glory,” declared Wilmot who is the daughter of reggae artiste and surfer Billy Mystic of Mystic Revealers.

“I see the impact that surfing has had on the lives of women around me and I needed to be sure that any story being told was true and authentic. I was guarded as it related to how people would come in and tell my story. As a result it was a long process before I agreed to go ahead,” she stated. Source Jamaica Observer.