Diaspora members helping a bee farmer to achieve her dreams! 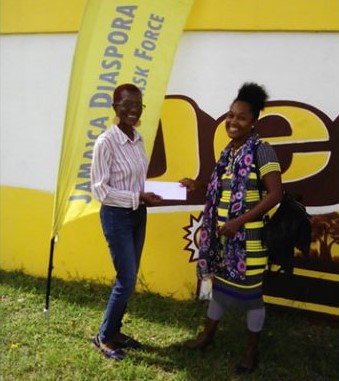 Sometimes you only need a little help to turn your dream into reality. Patricia Parchment needed a little help to make her dream of owning a large-scale Queen Bee rearing and beeswax production. With the help of the Jamaica Diaspora Agriculture Task Force’s (JDAT) initial Investor Circle micro grants, her dream very close to becoming reality.

Parchment, who is currently involved in the harvesting and bottling of honey as well as the manufacturing of lotions and hair oils, is looking to get into large-scale Queen Bee rearing and beeswax production.

She said that despite being absorbing engagements, regarded as unconventional areas for women, they are lucrative, and other female farmers should give consideration to getting involved.

Among the benefits to be derived, she noted, are extensive training and the opportunity to better understand the characteristics of bees.

Parchment, who is president of the Westmoreland Bee Farmers Association, said she wants to get more farmers involved in bee farming as well as assist with the development of youth in agriculture.

“My hope is for the bee industry to be taken seriously,” she said.

Parchment said that bee farming is multi-dimensional and pointed out that she was “now venturing into soap-making in an effort to use up the bee products such as wax and honey, in my products as much as possible”.

The bee farmer said that while she currently sells to the general public, she aspires to further develop her apiary in an effort to expand sales to outlets such as supermarkets.

Parchment, pointing out that she was relatively new to the industry, said that she started three years ago with one hive.

She added, however, that the business was growing and boasted that she had increased the number to 27. Her goal of becoming a commercial bee farmer requires her having 120 hives.

Parchment said that bee farming equipment is very expensive and noted that women, in particular, encounter difficulties in sourcing equipment.

She said that this was why she had applied for the Diaspora’s Investor Circle micro grant.

Parchment, who is also a member of the Westmoreland Organic Farmers Society, said that she hoped the grant would enable her to fulfill her dream of becoming a commercial bee farmer, thereby accessing the export market and generating significantly greater earnings.

A 2009 Agriculture and Fisheries survey showed that of 1,202 registered Jamaican bee farmers, only 137 were women. JIS.

2 responses to “Diaspora members helping a bee farmer to achieve her dreams!”